Threaded Pipe fittings are the most common method of connecting pipes. Threaded pipe fittings are predominantly used for small pipe diameters, much like Socket Weld Fittings are also used for smaller piping systems. They are generally used for piping with an Outside Diameter (OD) of 2.375-inch (60.3 mm) or smaller that is piping with a nominal diameter of NPS 2 or smaller.
The ASME B1.20.1. document outlines the dimensional standards for tapered pipe threads. It gives all required dimensions which include the pitch diameter, the number of threads per inch, and the normal lengths for all pipe sizes.

All the threaded fittings on this site are provided with NPT thread, ASME B1.20.1. The (American) National Pipe Thread, Tapered, is the most widely used thread connection in North America. Threaded pipe fittings are an effective way to seal pipes used for transporting liquids and gases including steam and hydraulic fluid. Due to the taper on NPT threads they form a seal when tightened as the sides of the threads squeeze tight against each other. This is in contrast to straight or parallel threads which only hold the pipe fittings together and do not provide a seal. The thread is tapered 0.75 in/ft (62.5 mm/m), making a larger diameter continually compress into a smaller diameter and this finally forms a seal since no clearance remains between the crests and troughs of the threads due to the taper. As a result NPT fittings should be free of burrs and lubricated using a thread seal tape or lubricating paste like thread seal paste pipe dope. Using tape helps to reduce corrosion and galling on the threads, which could otherwise make future disassembly very difficult.

The Advantages and Disadvantages of Threaded Pipe Fittings 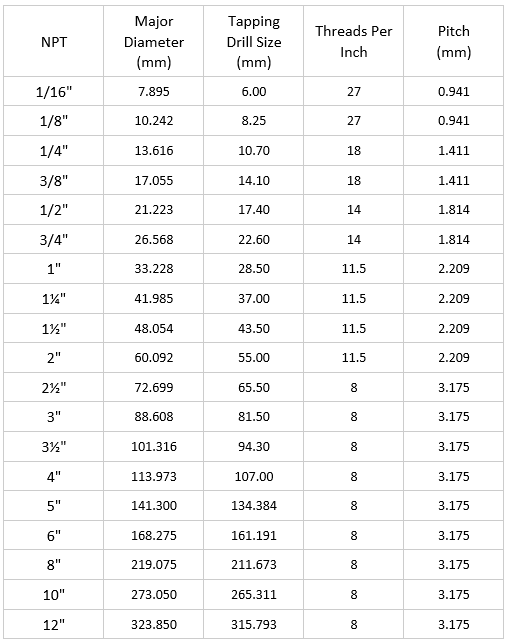